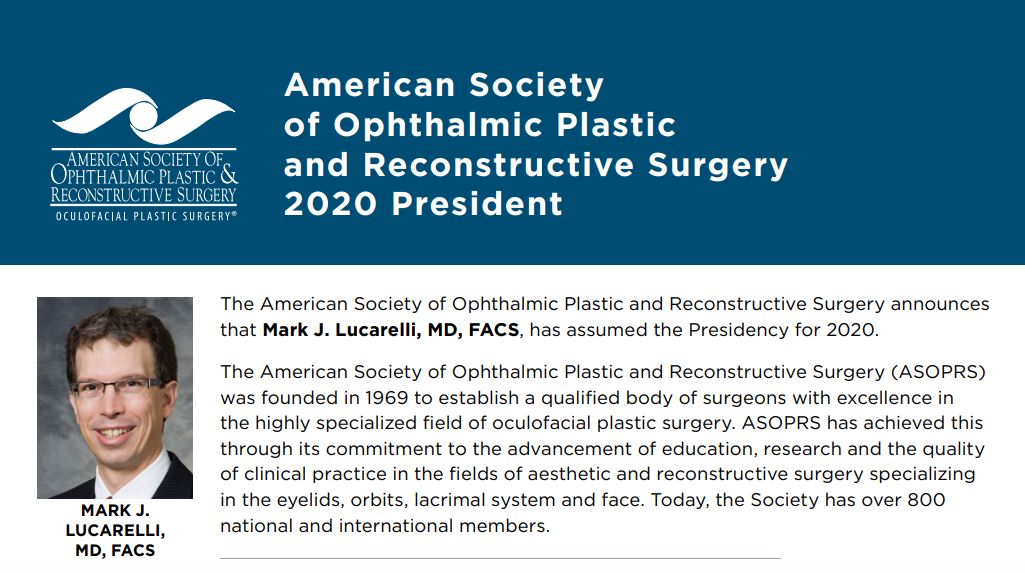 The American Society of Ophthalmic Plastic and Reconstructive Surgery announces that Mark J. Lucarelli, MD, FACS, has assumed the Presidency for 2020.

The American Society of Ophthalmic Plastic and Reconstructive Surgery (ASOPRS) was founded in 1969 to establish a qualified body of surgeons with excellence in the highly specialized field of oculofacial plastic surgery. ASOPRS has achieved this through its commitment to the advancement of education, research and the quality of clinical practice in the fields of aesthetic and reconstructive surgery specializing in the eyelids, orbits, lacrimal system and face. Today, the Society has over 800 national and international members.

Dr. Lucarelli graduated from University of Dayton with a B.A. in Chemistry and received his Doctor of Medicine degree from Washington University in St. Louis in 1991. After serving his internship at Barnes-Jewish Hospital in St. Louis, he completed residency training in ophthalmology in 1995 at Harvard University’s Massachusetts Eye and Ear Infirmary. He subsequently served as Chief Resident and Director of Eye Trauma at MEEI from 1995-1996. Dr. Lucarelli completed an ASOPRS-accredited fellowship training program at the University of Wisconsin-Madison from 1996-1997 under the program directorship of Dr. Richard K. Dortzbach and associate preceptorship of Dr. Bradley Lemke and Dr. Russell Gonnering. Dr. Lucarelli also served as a Heed Ophthalmic fellow.

Dr. Lucarelli joined the Department of Ophthalmology and Visual Sciences at the University of Wisconsin-Madison in 1997 and has served on the department’s full-time faculty ever since. He has served as Program Director of the ASOPRS fellowship in Oculofacial Plastic Surgery at UW Madison since 2005 and was promoted to Professor of Ophthalmology in 2009. In 2016, he was named the inaugural Richard K. Dortzbach Professor of Oculofacial Plastic Surgery. Dr. Lucarelli is known as an avid teacher of residents and fellows, and he has been voted Outstanding Clinical Instructor, Outstanding Surgical Instructor, and Outstanding Instructor to Resident Education in Ophthalmology on several occasions.

Dr. Lucarelli’s academic interests include facial and orbital anatomy and small incision oculofacial surgical techniques. He has authored numerous peer-reviewed publications and book chapters including the Clinical Atlas of Procedures in Ophthalmic and Oculofacial Surgery. Dr. Lucarelli is active within the American Academy of Ophthalmology (AAO) and received the AAO Senior Achievement Award in 2012. Dr. Lucarelli is a member of the Orbital Society and has also been a leader within the International Thyroid Eye Disease Society (ITEDS), serving on the ITEDS Executive Committee from 2013-2016. Dr. Lucarelli also serves on the Advisory Board of the North American Society of Academic Orbital Surgeons. He has been honored to serve internationally on a dozen medical mission trips.

Dr. Lucarelli has served ASOPRS in many leadership roles over the last 20 years, starting on the Education Committee in 1999. Other major roles have included: Program Committee 2005-2007 (Chair, 2007); Awards Committee 2011-2013 (Chair 2013); Secretary of Meetings 2013-2014; Program Directors’ Committee 2005-present (Chair 2016-2018); and Executive Committee (5 years).
Dr. Lucarelli considers his active participation in ASOPRS among his most rewarding professional activities. He is honored and humbled to serve the organization as president.